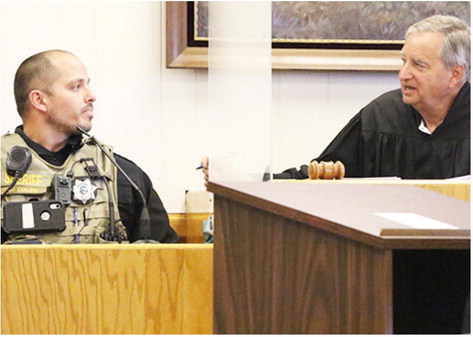 A jury found Trevor Levi Crain of Culbertson not guilty of assault with a weapon and criminal mischief charges during a trial in Wolf Point on Thursday, June 16.

Crain was accused of injuring Angelo Boyd during an alleged confrontation in Culbertson on Dec. 22, 2021.

In his closing arguments, county attorney Frank Piocos said that Crain had the motive to commit the crime because Crain and Boyd were having relationship issues with a woman.

Piocos noted the victim got hit in the head by a pool cue and that a pool cue was found in Crain’s vehicle. Piocos said that the testimony by Boyd and witness Robert Gustafson both say that Crain was outside of Boyd’s apartment in Culbertson.

Showing photos of an injured Boyd to the jury, Piocos stressed that Crain intentionally attacked Boyd. He said the injuries were consistent to being done with a pool cue.

Piocos said that some people might think it’s odd that Boyd was involved in another matter that evening, didn’t seek medical treatment and traveled to Poplar before calling law enforcement.

“So what? You can be a victim of a crime if you are intoxicated or had a few beers,” Piocos said. “Maybe it seems odd, but that doesn’t mean Mr. Boyd wasn’t assaulted.”

Public defender Christopher White said the jury needed to find Crain guilty beyond a reasonable doubt and that the burden of proof lies with the state of Montana. White asked what is more reasonable that Crain slept with someone else’s girlfriend and later assaulted the boyfriend or that Boyd heard the news, had a fight with the girlfriend and then crafted a story regarding Crain. White said there were many unanswered questions doing the testimony. Questions remained whether the attack was inside or outside of the apartment, and whether the weapon was a pool cue or a stick, The vehicle window broken wasn’t reported to police the night but not until the next day.

“We have no clear story of what happened,” White said.

The jury was out for 40 minutes before coming back with its verdict.

Testimony from county deputies included, that after the report from Boyd, they went to Crain’s residence. No one came to the door, but Crain’s vehicle was still warm to the touch. An officer was able to see a pool cue in the vehicle.

One deputy testified to being at Boyd’s apartment in Culbertson earlier that evening on a domestic assault complaint from a woman.