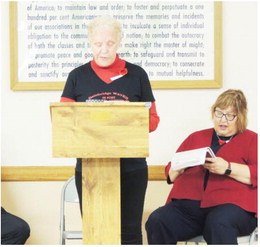 Thomas Mann American Legion Post hosted the Memorial Day ceremonies on Monday, May 30. With an attendance of 86, Commander Peggy Purvis opened the program with the Pledge of Allegiance followed by patriotic music by pianist Felixe Becker and the invocation was delivered by Pastor Gretchen Wagner.

The Memorial Day address was delivered Ray Nay. Nay was originally from Culbertson and served in the Army during the Vietnam War. He relayed his experiences as a “tunnel rat” and his insights into the effects of war. The Roll Call of 289 deceased service members was counted, of which, 158 are at rest in Hillside Cemetery. The program conclude with bugler Bella Petersen playing Taps and the Honor Detail firing a three volley salute. The Legion Auxiliary provided lunch for the attendees.