Anthony Albert Sifuentes Jr., 37, is facing the felony charge of intimidation and the misdemeanor charges of false reporting to law enforcement authorities and disorderly conduct. He is scheduled to appear in district court on Jan. 13. Bond was set at $35,000.

According to court documents, a Fort Peck Tribes Department of Law and Justice officer was dispatched to a resident in Wolf Point with a report of a man bleeding out on Dec. 20. When tribal and Wolf Point Police Department officers arrived at the residence, Sifuentes was on the porch. He appeared heavily intoxicated but wasn’t injured.

He was arrested for false report and disorderly conduct.

While Sifuentes was in jail, he allegedly made multiple statements about getting out of jail and that he was going to find and kill the corrections officer who was booking him. 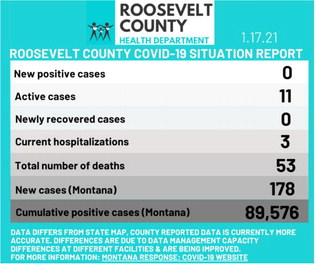