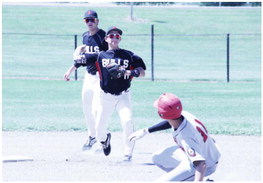 An 8-3 home victory over Glasgow on Sunday highlighted the week of baseball for the Post 49 Bulls. Pitcher Walker Ator led the way in the win with 11 strike-outs and by walking only two batters.

The contest was deadlocked at 3-3 until the Bulls emerged with four runs in the bottom of the fifth. A single by Dylan Tabbert knocked home Payton Hauge with the first run of the frame. After Walker Ator crossed the plate for a 5-3 lead, Bode Miller came through with a hit to bring home Tabbert and Colt Miller.

The Bulls added a run in the bottom of the sixth when a single by Tabbert scored Braeden Romo.

Payton Hauge led the Bulls' offensive attack with four hits. Romo added three hits. B. Miller and Tabbert each had two hits. Having two runs batted in each were B. Miller, Romo and Tabbert.

After the Reds gained a 1-0 lead in the top of the first, the Bulls' Romo went deep for a two-run homer in the bottom of the first.

The Bulls increased their lead to 3-1 in the bottom of the second when Jackson Oie scored on an error.

Glasgow, however, battled back with a pair of runs in the third for a 3-3 deadlock.

Glasgow outscored the Bulls by an 11-10 final in the second game of the day.

After the Bulls took a 5-1 lead, Glasgow exploded for seven runs in the top of the fourth for an 8-4 advantage.

The Bulls bounced back with three in the fourth and another in the fifth for a 9-8 lead. The Reds went ahead to stay with two runs in the sixth.

Colter Oie accounted for five hits. Other leaders in hits were B. Miller with three and Johnson with two.

The Bulls dropped two games against Glendive on Thursday.

The Blue Devils scored a run in the top of the seventh to win a 3-2 pitching dual in the first game.

Glendive took a 2-0 lead in the first two innings, and the Bulls fought back with two runs in the fourth.

Accounting for the Bulls' four hits were B. Miller, Johnson, C. Oie and Romo. B. Miller and C. Oie scored runs.

Johnson and Ator pitched well for the Bulls.

Glendive tallied 10 runs in the first inning to beat the Bulls 14-2 in the second game.

Having two hits each for the Bulls were B. Miller, Hauge and Beery.