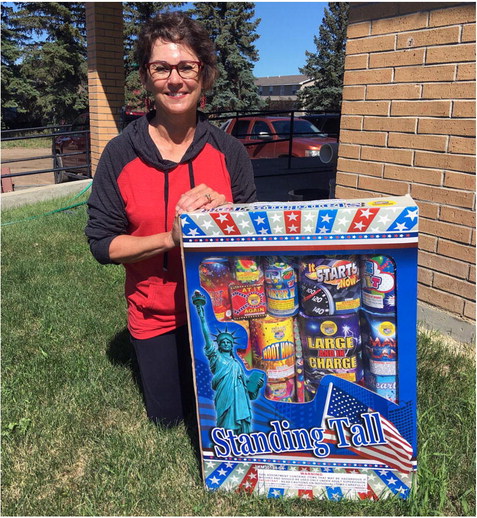 When the sky lit up this past Fourth of July, it symbolized two things for the Roosevelt Memorial Healthcare Foundation: generosity and unwavering support from the sponsors and supporters of the Light-up RMC fundraiser. Now the work begins. With the nearly $14,000 raised during the month-long raffle, RMC can begin installing an updated patient’s call-light system in each of their 25 in-patient and long-term care rooms.

This year, the raffle will replace the Foundation’s annual Fall Fest fundraiser typically held in October. Participants purchased $5 tickets to win a celebration package consisting of $250 in fireworks, large lawns games and a rolling red drink cooler. The winner of the $600-valued prize was Bonnie Panasuk, of Culbertson.

It’s humbling to ask a community for support at a time when everyone is affected by the unprecedented events taking place in our country. More humbling, was the tremendous outpouring of support we received. I don’t think a day went by when there wasn’t a return envelope in my mailbox from someone wanting to give and make a difference in their community.

Combined with the funds raised from last year’s annual Fall Fest fundraiser as well as a $5,000 grant received from the Burlington Northern Santa Fe Railroad Foundation, the RMHF has roughly $30,000 to complete the project.

The current call-lights system was state-of-the-art when installed with the building in 1978. But over the years, it has become obsolete and impossible to find parts or servicing companies to maintain it. The new system will have some added features that were never available back when it was installed that will improve efficiency and provide better care for patients.