Pippenger Is Inspiration For Many 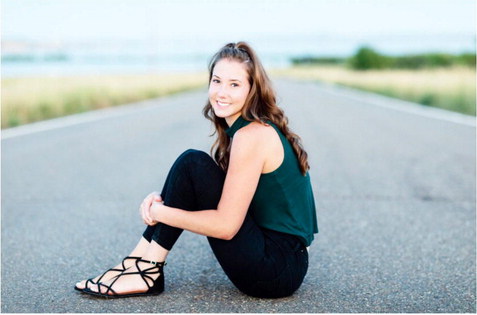 After suffering a spinal cord injury from a car crash as a sophomore on Oct. 30, 2017, she received great support from the community of Bainville as well as all the other schools in District 2C.

“Bainville was very supportive. They were always there,” the 2020 high school graduate said. “The whole district really did. I felt really loved and it made me feel very good that they were helping me through this.”

Kailin, a daughter of Casey and Billie Pippenger, was enjoying a good deal of success on the athletic field prior to the accident. She began playing for the Bulldogs' high school basketball team as only an eighth-grader, started in volleyball as a freshman and qualified for the Top 10 track meet in her freshman year.

After the crash, she was operated on at a children's hospital in Minneapolis, Minn., and then spent a month there. After that, she underwent rehabilitation at Craig's Hospital in Englewood, Colo., for another month.

“It really helped me to learn to do things again,” Pippenger said of her time at Craig's. “It was adjusting to my new lifestyle.”

While fundraising events were being held in eastern Montana and Williston, N.D., to help cover medical costs, the young girl's attitude continued to be remarkable throughout the process.

“My teammates and classmates really helped,” Pippenger said of her inner strength. “Of course, there are always bad days. I'm very grateful that it wasn't any worse.”

She was able to keep up on her studies thanks to a tutor that was available at Craig's for her. During that Christmas break in 2017, she was able to return home. She started to attend classes in Bainville during early January.

“So, I just jumped back in,” Pippenger noted.

Despite being in a wheelchair, she also quickly become involved in Bainville's sports again as a manager for the girls' basketball squad.

“I found my new spot in sports and accepted that things weren't going to be the same, but will still be good,” she said.

She continued in her role as a manager for Bainville's sports teams for the rest of her high school days. How important was her new spot for the Bulldogs? She was selected as Bainville's Female Athlete of the Year as a senior.

Pippenger said she was surprised to receive the award that was decided on by Bainville's coaches.

Her contributions led her to receiving an athletic scholarship from Williston State College to be the women's basketball team's student manager.

“I did a lot with Coach Kia and she offered me the athletic scholarship,” Pippenger said.

When Bill Triplett took over the basketball program this spring, he reoffered the scholarship to her. Triplett has ties with District 2C schools Lambert and Savage.

“I've found my spot being involved in sports in other ways,” she added.

Pippenger, who earned salutatorian honors in Bainville, believes she will always be involved in sports in one way or another. After trying it one time in Colorado, she laughed that wheelchair basketball isn't in her future. “It was not my thing.”

During her junior year, she helped coach Bainville's junior high track athletes. Both of her younger sisters are involved in volleyball, basketball and track.

“I give them pointers now and then,” Kailin said.

She wishes to express her gratitude for all the support she has received during the significant obstacles that she encountered.

“You can't change things, so make the best out of it,” she offered as advice.