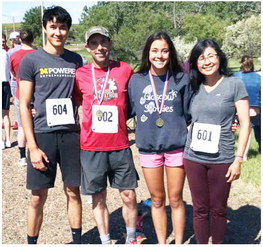 Colter Barnett placed first in the novice bike race. He was followed by Michael Fransen and Darrell Walstad.

At press time, results for the 1 mile race were not available.

For more information about the race, call the Glasgow Area Chamber of Commerce and Agriculture at 228-2222.