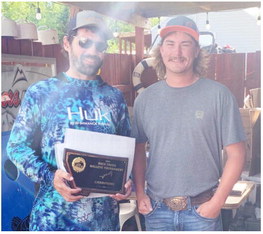 Jay Erickson (left) and Garrett Long, both of Wolf Point, came out on top of the annual Rock Creek Walleye Tournament last weekend. They ended the tournament with a total of 36.96 pounds. Taking second was a Wyoming pair — Joseph Baird of Gillette and Will Schlit of Riverton — finished with 29.68 pounds. Third-place finishers were Jesse Reuter of Sidney and Jordan Dasinger of Glendive, who caught 27.56 pounds. Fourth place was Brandon Babb of Fort Peck and Gary Cayko of Mandan, N.D., with 27.24 pounds. Jason Eggebrecht of Fort Peck and Ross Lien of Glendive took fifth with 26.83 pounds. High winds caused the cancellation of Saturday’s tournament fishing, but the tournament was held Sunday despite challenging weather.