‘Jackets Face Off Against Froid-Area Teams 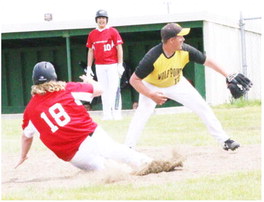 The Wolf Point Yellow Jackets’ “A” team opened the season at Froid with 15-5 and 12-2 doubleheader losses to the Post 49 Bulls Saturday, May 30.

The “B” teams with younger and less experienced players split a twin bill on Wolf Point’s Burkie Field Sunday, May 31, with the Yellow Jackets winning the first game 13-10 and the Agland A’s winning the second game 20-16.

“We lost by 10 in both games, but we played a lot better the second game,” he said.

“The first game of the year with pretty much a new coaching staff,” Snyder said.

“We play what we call ‘sandlot ball’,” Crain said.