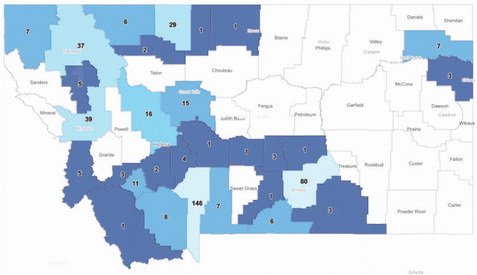 Montana Governor Steve Bullock said Monday, April 27, “We’ve officially started Phase One of Montana’s gradual reopening. But let me be clear: we could be in this first phase for a long time. We will not move out of Phase One if the curve doesn’t remain flat.”

For up-to-date information on COVID-19, go to dphhs.mt.gov.

When making the appointment, the department will arrange the time and will have a staff person at the designated door to escort the member of the public into the building. To the greatest extent possible, the public is encouraged to conduct business online, by telephone or by fax. The phone number to the main switchboard and all departments shall be posted on all doors.

“We are staying closed tentatively until May 22,” said Wallette. “All our tribal restrictions will be in place until then.”

Wallette confirmed that curfew, shelter in place and state of emergency orders will remain in effect. Non-essential enrolled-member- owned businesses like casinos will remain closed. Wallette added that May 22 is a target date and may change.

“If we have no new cases for an extended period of time, we will do a phased re-opening before that date and, if we have an influx of new cases, it will be after that date.”

The Valley County courthouse opened Monday, April 27. The county will be conducting business by phone or mail when appropriate. The health department will continue operate by appointment only. The senior citizens center will remain closed until further notice. Meals on Wheels continues to operate. Grab n’ go meals are available on Tuesdays and Thursdays for 60+. Confirmed COVID-19 Cases

At presstime, there were 451 confirmed cases of COVID-19 in Montana, up from 437 on Tuesday, April 21. Of those cases, 356 are listed as recovered. There have been 61 total hospitalizations, with 10 hospitalizations listed as active. Fifteen people have died from the virus. Most are treating their symptoms at home. As of 10 a.m. Tuesday, April 28, a total of 13,191 tests had been completed.

The Glasgow School board voted to continue distance learning rather than go to onsite learning for remainder of school year. Gov. Bullock had given school districts the opportunity to send students back to on-site learning after May 7. Superintendent Wade Sundby announced that GHS graduation will take place on the date and time as originally scheduled. Specifics are still being worked out. Attendance will be limited and the ceremony will be broadcast with video and audio. Wild Horse Stampede Committee The Wolf Point Wild Horse Stampede Committee issued the following press release April 28: “The Wild Horse Stampede is on schedule and planning to be held July 9-11; however, we are closely monitoring the current regulations from Gov. Bullock’s directives and the local health department. We will be making a final decision by June 1 according to the most updated directives.”