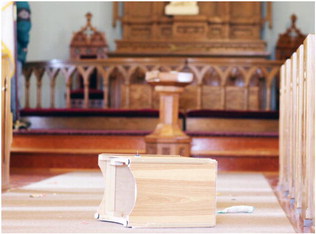 McCabe resident Karen Larsen Synan told the Community News that a break-in occurred at Ebenezer Lutheran Church in McCabe April 9 resulting in considerable damage. According to Synan, the church has been vandalized on four previous occasions since fall of 2019.

Local residents Austin Oelkers and Alisha Maiolo came across three individuals in front of the church in the evening April 9. Oelkers said the individuals fled the scene in a dark, late model pickup with white stickers in the window after he initiated his turn signal near the church. He stepped inside the church after the individuals left and noticed damage to the altar, baptismal fountain and sheet rock throughout the building.

Oelkers said he immediately left the church and went to the house he shares with Maiolo to locate a firearm for protection. Maiolo called the Roosevelt County Sheriff’s Office at approximately 10 p.m. to report the break-in.

According to Summers, another call was received in the evening on April 10 to report the appearance of several individuals who seemed to be cleaning up debris at the church. According to Synan, who made the call, Culbertson residents Mark and Jo Nelson noticed the individuals and stopped to ask them what they were doing on the property. VanKerkhove responded. Summers said the investigation is ongoing, with Sadler assisting VanKerkhove on the case.

Along with damage to the altar and fountain, several Bibles, registers and other religious items were strewn throughout the church. Numerous holes were smashed in the walls and at least one closet. On previous occasions, sacramental wine, foodstuffs and even some toilet paper has been stolen from the property.

Synan said the congregation is in the process of filing an insurance claim to cover some of the damages.

If you have any information about the break-in, call the sheriff’s office at 653-6230.