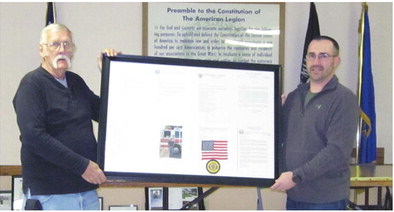 On Feb. 10, American Legion Commander David Dean of Thomas Mann Post No. 81 was notified that Michael Olson of Culbertson was selected as the Montana American Legion Firefighter of the Year. Said the notification: “We had a number of excellent candidates nominated for this prestigious award and it was a very difficult decision to pick just one.”

On March 14, Dean presented Olson with a framed collage of his award documents. The presentation was followed by a luncheon at the Legion Hall in Culbertson.

In his recognition speech, Dean stated: “Mike has established himself as a top level firefighter on the Culbertson Volunteer Fire Department since 2002. He currently serves as the fire department secretary and has also been recently named the Roosevelt County Fire Warden. Mike has dedicated his time to the department to being highly trained and knowledgeable about all equipment the department utilizes and the strategies and tactics for the types of fires and rescue situations that are encountered on an annual basis. Mike has been instrumental in successful grant writing campaigns to replace old fire engines with new and improved units that will be in service for decades.

“Mike has also been an active firefighter for the state DNRC during several previous summers. Additionally, Mike is also a valued member of the community in other capacities. He has actively served as an EMT, high school track coach and as a Cub Scout leader and is the K-12 principal for the Culbertson School. “He is married to Christina Olson and they have two children, a son, Colby, and a daughter, Kayli, both of whom are currently attending Culbertson High School.”