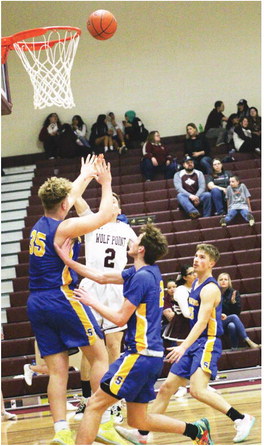 With an eight-year state tournament drought and nine years since Wolf Point has claimed a Class B state title, the Wolves have been playing like champions the last half of the basketball season and are looking for big things ahead.

Wolf Point won seven of their last eight games, only losing to Scobey in a non-conference tilt Saturday, Feb. 15. The Wolves have beaten each of the other District 2B teams since Jan. 24.

All four teams remaining after the play-in will advance to the Northern B divisional, also in Malta Thursday through Saturday, Feb. 27-29. They will be playing for divisional seeding at the district tournament.

“We open up against Malta. We split with them this season,” Wolves’ head coach Troy Blount said.

on page 7 The last weekend of the regular-season schedule saw the Wolves beat the Scotties 79-55 in Glasgow Thursday, Feb. 13’ and drop a non-conference tilt to Scobey 64-40 in the season finale in the Wolves’ Den Saturday, Feb. 15.

Lance St. Germaine poured in 26 points in the Glasgow game, followed by Tade Wallette posting 15 points and Antone Manning registering 11. St. Germaine, Manning and Wallette combined for a total of nine three-balls from outside the arc, each drained three 3-point goals. Wallette registered a pair of 3-pointers in the Scobey game.

The Wolves’ reservation rival Poplar Indians dropped the season finale to the 2B front runner in Harlem 101-53 Friday, Dec. 14. No stats were available.

The Indians (1-7, 3-14) finish schedule in fifth-place and facing the play-in game with Malta. The Indians played in the 2019 state tournament.