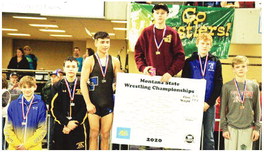 Poplar sophomore wrestlers Jase Frederick and Jacob Berger both placed again, this time at the State All-Class Wrestling Meet at the Metra in Billings Friday and Saturday, Feb. 14-15.

Frederick took fourth in the 113-pound weight class and Berger placed fourth at 205.

Also qualifying for the state meet from Poplar were: Mitchell Youngman, 132; Logan Boadle, 152; and Will Turcotte, 170.

Nine wrestlers finished the season with eight qualifying for the Eastern B/C Divisional at Huntley Project Saturday, Feb. 8.