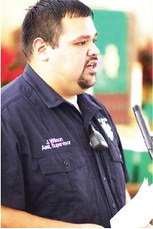 The Wolf Point 100 Club is celebrating its 40th anniversary this year. The club is a local nonprofit, tax deductible organization dedicated to funding and supporting Faith Lutheran Home, Trinity Hospital, Listerud Rural Health Clinic and the Trinity Hospital Volunteer Ambulance Service. Organized on March 4, 1980, the club held its first business meeting in April of that year.

According to current club president Tammy Bartel, Penner was the first to pay his $100 membership.

In its first year, the club raised $1,400, the bulk of which went to Faith Lutheran Home for the purchase of safety bed rails and Trinity Hospital for an operating room gurney cart.

By the second annual meeting, membership had skyrocketed to 177. Wolf Point’s mayor at the time, Ben Harada, joined the club. Wolf Point’s own former Montana Governor Ted Schwinden and wife Jean even jumped on the bandwagon and joined up.

In five short years, the club surpassed the $50,000 mark with gifts to local medical care providers.

When the club turned 10, January was designated as membership month. The first mayoral proclamation encouraging area residents to consider membership was declared by mayor Delmar “Butch” Olsen in 1991. Annual meetings were also moved from October to January to jump-start the yearly drive for memberships. The club also topped $100,000 in its total contributions that year.

In February 1993, the club helped install an aviary at Faith Home. The gift was made possible by Lin and Kenneth Hickel in honor of their mother. The club continues to cover maintenance costs on the aviary. By its 15th anniversary, the club surpassed $210,000 in donations. That figure rose to $297,000 by the club’s 20th year. As of 2019, the total had risen to $636,000. The highest amount given in a single year was $21,700 in 2007. As the costs of medical equipment continues to rise and the population in rural communities erodes, the club has sought supplemental funding from alternative sources. Con-Agra Brands Foundation, MDU Resources Foundation, Thrivent Foundation, Montana Community Foundation and Roosevelt County Community Foundation have all funded grant requests from the 100 Club.

Recently, the board of directors has explored more creative ways to attract community involvement. During the 2017 Stampede it organized a “chair-ity” auction fundraiser followed by a “yard art” auction last summer. A portion of online purchase costs can also be given to the group via Amazon Smile by designating the Wolf Point 100 Club as the charity.

The club is hosting a variety show in the auditorium at Wolf Point High School Saturday, Feb. 29, at 7 p.m. Admission is on a donation basis (pay what you can).

Planned entertainments include performances by the Eastern Montana Gymnastics Team, Wolf Point High School speech and drama, local musical talent and a skit from the Lefse Ladies. Robert Toavs will emcee the event and perform cowboy poetry. Carol Hackley is also rumored to be performing cowboy poetry and members of the Wolf Point Volunteer Fire Department will battle representatives from the Wolf Point Police Department in a lip-synch contest.

For more information about the show or membership in the club, call Bartel at 653-1099.