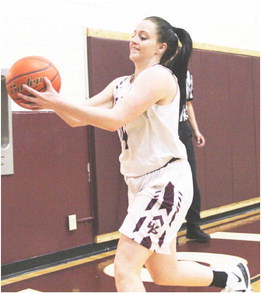 The Lady Wolves beat Class A Sidney in overtime at home Friday, Jan. 31.

The regular schedule of the basketball season is winding down for the defending state champion Lady Wolves with the District 2B tournament just two weeks away.

The graduation of six seniors in May 2019 who all played in the state title game has left head coach Brent Nybard and his coaching staff challenged with a young team.

Wolf Point was missing head coach Brent Nygard and at least two players due to illness when they lost to Malta. Another was sidelined with an injury and a fourth was ineligible for other reasons.

Wolf Point came back in the Sidney game with Nygard and two of the players who could not play the previous day.

“We won by five in overtime,” Nygard said. The loss of a key player during the fourth quarter complicated the close game with Sidney.

“Mya [Fourstar] fouled out with four minutes to go. We had some young players step up. Tori [Nygard], who was out Thursday, had 15 points and 14 rebounds against Sidney,” Nygard said.

“We were 23-32 from the free throw line. I was really happy with our Sidney game. We battled hard and lots of players stepped up and gained some confidence,” he said.