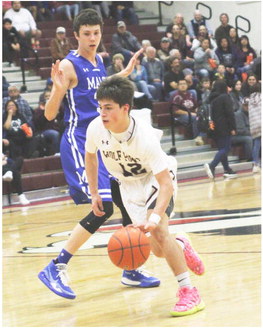 Feb. 8; at Glasgow Feb. 13 (the only remaining 2B conference game); and Scobey at Wolf Point for the schedule finale and senior night, Saturday, Feb. 15.

A strong third quarter powered the Wolves to a 6056 win of a conference game with Malta Thursday, Jan. 30, in the Wolvesâ€™ Den. Coming out of halftime with the tally at 30-30, Wolf Point posted a 29-26 second half to secure sole possession of second place in District 2B.

St. Germaine hit the target from outside the ark twice for a pair of 3-point goals.

Connor Tuss and Kooper Oxarart led Malta with 18 and 14 points. Oxarart had a pair of 3-point goals and Tuss had one.

The Wolves also beat Class A Sidney 51-46 in a non-conference game played in Sidney.

â€śWe are coming together and playing well at the right time. Iâ€™m so proud of them,â€ť he said. â€śOur hard work is paying off.â€ť