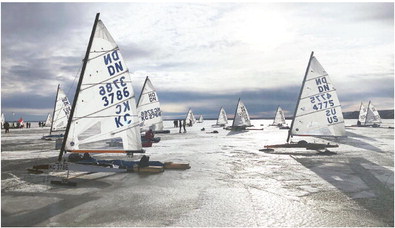 There were 61 entries overall, with four boats from Canada.

that he has been invited to shoot the world championships somewhere in Europe in February. The race location will be determined as weather conditions permit.

“The invitation is on the table, but the challenge is I have to pay my way for last-minute travel to an unknown destination in northern Europe,” said Heavey. A GoFundMe account has been set up to raise travel expenses. To contribute and/or view a drone video footage of the Fort Peck event, visit www. gofundme.com/f/2020-Ice-Sailing-World-Championships.