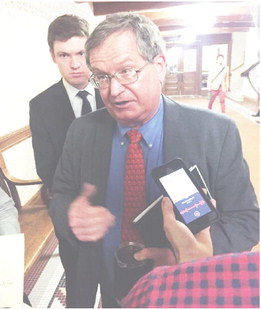 An unreleased audit report that reportedly faults how state government has determined which Montanans are eligible for health-care coverage through Medicaid — a finding that could disrupt infrastructure bonding authorized by lawmakers last year — has Gov. Steve Bullock’s administration at odds with legislative auditors.

Bullock officials, including budget director Tom Livers and chief legal counsel Raph Graybill, vehemently deny that there’s any question about whether the Montana Department of Public Health and Human Services has determined Medicaid eligibility in accordance with federal standards, arguing that the audit methodology is fundamentally flawed. They took their frustration with the audit, which won’t be made public until next month at the earliest, to the press last week, calling the findings “deeply flawed” and “reckless” The dispute, they said, has delayed their ability to issue infrastructure bonds, and could keep the state from getting projects going during the 2020 construction season.

The Legislature’s chief auditor, Angus Maciver, fired back in a Jan. 10 letter, writing that actions by the governor’s office and health department in the matter “may constitute an undue influence threat against the audit independence standards.” “Public statements by representatives of DPHHS and the Governor’s Office show, at best, an incomplete understanding of Single Audit Act requirements, federal cost principles, and professional and ethical standards for auditing,” Maciver wrote.

Because the state could potentially have to repay $135 million in federal Medicaid funding if federal officials conclude the program is mismanaged, auditors want the governor’s office to include a disclosure notice to that effect in financial filings.

Since those filings are used by bond-rating agencies that evaluate how likely the state is to be able to repay borrowed money, such a disclosure could throw a wrench in $80 million of infrastructure bonding approved by the 2019 Legislature, either making bonding infeasible or forcing the state to accept higher interest rates. Because executive branch officials don’t consider the audit findings reliable, they don’t believe the disclosure is appropriate.

“We’re not going to disclose a liability we don’t think exists,” Livers said in an interview.

“I respect that the audit division has a purpose,” he said. “I think this would have been a useful audit if they had tested against the criteria the department is required to use.”

At a Legislative Audit Committee meeting Monday, part of the ongoing Legislative Week, Maciver declined to discuss the Medicaid audit in detail. The work is incomplete, he said, and it’s the Legislative Audit Division’s long-standing policy to refrain from publicly commenting on audit reports before they’re presented to the committee in a formal hearing, which isn’t planned until April.

Bullock officials acknowledged they haven’t seen the full audit report, but said they’ve discussed its contents with auditors to the point that they’re confident their concerns are valid. They also said they’re frustrated to find themselves hemmed in by the audit’s conclusions without an opportunity to contest its findings in public.