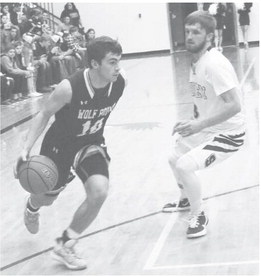 The Wolf Point Wolves were able to stop Sidney down the stretch to edge the Eagles, 53-51, in non-conference boysâ€™ basketball action on Monday night, Jan. 6.

The visiting Wolves led 42-38 at the end of three quarters of play, but Sidney pulled to 44-42 behind baskets by Jerome Entz and Cooper Mc-Glothlin.

Wolf Point was up to the challenge as Lance St. Germaine and Michael Goodman connected on consecutive three-pointers for a 50-42 lead with 3:19 remaining.

After Sidney fought back to 53-49 with 1:40 left, Wolf Point's defense held the Eagles in check the rest of the way until Jed Fox hit a basket at the buzzer for the 53-51 final.

Reaching double figures for the Wolves were Nick Page with 12, St. Germaine with 12 and Antone Manning with 10. Treyton Lilley added nine points. Also scoring were Goodman with three, Tade Wallete with three, Sage Hutchinson with two and James Lien with two.

Sidney's top scorers were Entz with 15 and McGlothlin with 14 points.

Wolf Point led 17-16 at the end of the opening quarter.

The Wolves accounted for eight of the last nine points of the half for a 34-26 advantage. St. Germaine scored four of those points.

The Eagles battled back to 40-38 on a steal and layup by Boston Peters late in the third quarter, but Wolf Point's Lilley then scored for a 42-38 margin entering the fourth quarter.