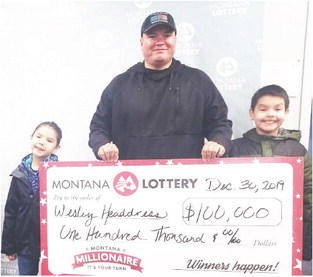 Wesley Headdress of Wolf Point was awarded $100,000 from the Montana Lottery Dec. 30. He accepted his winnings with children, Layla and Liam.

Headdress, who bought the winning Montana Millionaire ticket at Agland Co-op East in Wolf Point Dec. 27, said he had already invested some of the money.

â€śWe bought a few vehicles,â€ť said Headdress. â€śMy father had a 1979 Ford when I was younger. He passed away last January, so I honored him by getting one for my family.â€ť

Headdress said he was considering some charitable efforts locally.

â€śIâ€™m also [going to] donate some to the children of Wolf Point,â€ť he said. â€śIâ€™ve decided that Iâ€™m going to put on a little man/woman basketball tourney,â€ť said Headdress in a Jan. 7 social media post. â€śAll grades will be co-ed. My dad never liked the fact of kids arguing, so this tournament is not [going to] be about competition. Itâ€™s [going to] be about fun.â€ť

Headdress said he was an annual lotto player, if not an especially regular one.

â€śI play Montana Millionaire every year,â€ť he said. â€śOther than that, Iâ€™m usually only a ticket player when the jackpots get up there.â€ť

Trudy Bird of Poplar also bought a winning ticket Dec. 27. She picked up her ticket at TJâ€™s Quick Stop in Poplar. Her winnings came to $100,000.