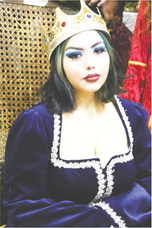 He said the kids, mainly WPHS Swing Choir members, built the set in a single day and decorated the stage and dining areas the day after.

Cast members assisted with dinner plans, while most arrangements were made by volunteers.

On Saturday, Northside School’s Ann Landsrud and other volunteers were seen hustling from room to room finalizing last-minute details. Parents of Swing Choir members were expected to volunteer at least two shifts each. Sharon Kolstad accompanied the performers.

Johnson said banners hung above the dining and seating area featured family names of present and past performers, with the most recent cast member names hung near the front of the stage. He added that cast members can opt to leave their banners for future performances or take them home.

As the evening’s program explained: “Tonight, as we lift our glasses in a toast to the Christmas season, we greet our old friends and we welcome our new ones upon this occasion — the celebration of our traditional Elizabethan Dinner.

“Our Christmas Dinner recaptures some of the merriment and color of the festive Yule celebrations of Elizabethan England. Festivities begin as trumpets herald the colorful procession of singers dressed in medieval costume. A second fanfare signals the bearers of the Wassail Bowl to approach the high table where the Lord of the Manor offers a toast to the Christmas season. As a third fanfare is sounded, stewards begin the parade of the boar’s head and dinner guests are served their traditional dishes. The climax is reached as a fourth fanfare introduces the highlight of the evening, the concert by the Chamber Singers, whose beautiful carols, ballads and madrigals tell the story of Christmas from Advent to Epiphany.

“With the sounds of each fanfare, you will discover Christmas as celebrated in the ancient traditions of Merrie Olde England. We present this annual dinner for your pleasure at the Christmas Season. As we raise our voices in a toast to the meaning of Christmas, we wish you and your families a season filled with joy and beauty.

“Before Christians celebrated Christ in Christ-mas as the new beginning, the new light of the world, pagans all over Europe celebrated their gods during the Winter Solstice. The ancient Mesopotamians performed rites to aid their god, Marduk in his struggle against forces of chaos. At this season, Zeus renewed his battle against Kronos (Time) and the Titans. The fol-lowers of Mithras celebrated December 25th as the birthday of the Unconquered Sun. Honoring Saturn, the god of Agriculture, the Romans celebrated the solstice season as the Saturnalia. The Scandinavians, who worshiped the sun as the giver of life and light, held festivals in its honor nearest the shortest day of the year.

“All of these celebrations and festivals included merriment; eating, drinking, and singing. During Saturnalia, the social order was overturned. Gambling was legal; courts were closed; slaves were dressed as masters; a mock king was chosen who became Lord of Misrule. Lavish banquets featured such delicacies as peacock eggs in pepper sauce, and gifts, which became quite elaborate, were exchanged. Among the Druids a boar was sacrificed to Freya (Aphrodite) — goddess of the soil, planting, fertility, and the human sacrifice. During the days of the Saxons, the Wassail (here’s to you) Bowl was offered to the Lord of the Manor.

“Of pagan origin are many of the traditional carols going as far back as Second Century A.D. In England from the 14th to the 16th century the word “carol” meant a poem for singing on any subject in uniform stanzas with a refrain which was to be sung at the beginning of the piece and repeated after every other stanza. In modern usage, a “carol” is a song connected with the Christmas season. The word comes from the Old French “carole” meaning round dance with the above parts sung by the different participants. Some of these carols with obscene words were sung by the Lords of Misrule and their courtiers. Chiefly responsible for the “Christmas Carol” as we know it today were the Franciscans who trimmed up the words. The earliest printed collection of carols in England including the “Boar’s Head Carol” was made in 1521.”