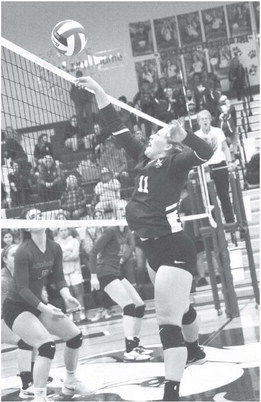 The volleyball season ended for the Lady Wolves with a second loss in the double-elimination Northern B Divisional tournament in the Wolves’ Den Thursday through Saturday, Nov. 7-9.

The Glasgow Lady Scotties was the only 2B team that will advance to the State All-Class Tournament in Brick Breeden Field House on the Montana State University Campus in Bozeman Thursday through Saturday. Nov. 14-17. 1B Choteau defeated Glasgow in the championship match after the Lady Scotties defeated Shelby. Fairfield was the fourth place finisher at the divisional. The Eagles did not advance to State.

The Lady Wolves earned their way to the state tournament last year, but played this season with a young squad after graduating six seniors from the varsity volleyball team in May. The Wolf Point squad played with just two seniors, Lindsay Nefzger and Tori Nygard. In addition to those two players, Wolf Point took five juniors, two juniors and two freshmen to the divisional tournament.

“The girls played hard all season long. They surprised a lot of teams and themselves at times. We saw lots of improvement from all the girls. They were young and inexperienced and came a long ways since August,” she said.

“We will miss our seniors, Lindsay [Nefzger] and Tori [Nygard]. They had a great season. But we look forward to next season with this great group of athletes,” Hanks said.