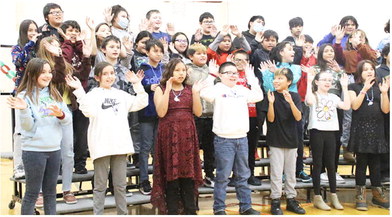 On the final week of school before the holiday break, Northside Elementary School students performed its Holidaze 2022 program on Tuesday, Dec. 20.

Sixth-grade band members played three songs for audience members. Band teacher Russell Johnson explained that it was good experience for the students to play in public and noted how much the band has improved during the year.

The fourth grade then performed a musical play titled, ‘ Twas the Night Before Christmas. Songs included Christmas is Coming, The Sugar Plums, St. Nick at Night, Reindeer on the Roof and When I Look at Santa.

The fifth-grade band’s play was The Big Chill. Christmas for the performance included

The Big Chill, Snow Day, A

The plays were directed by Bridget Drummond.