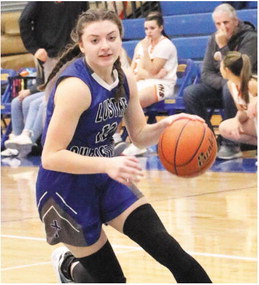 Lustre came up short in girls’ basketball contests against Plentywood and Fairview during the weekend.

The Lustre Christian girls’ basketball team lost to a strong Plentywood squad, 60-31, during the Scobey Invitational on Saturday, Dec. 10.

Plentywood used full-court pressure to take a 21-0 lead in the first quarter.

Lustre’s first points came on a 14-footer by Alexa Reddig to open the second quarter.

The second half was played more closely. Plentywood led 53-14 at the end of the third quarter. The scoring of Reddig highlighted play for the Lions in the quarter.

Aubri Holzrichter hit two three-pointers for the Lions in the final quarter.

Reddig led the Lions with 14 points. Also scoring were Brown with nine and Holzrichter with eight points.

Top scorers for Plentywood were Emma Brensdal with 16, Paityn Curtiss with 12 and Audrey Sampson with 10 points.

Lustre Christian’s girls’ basketball squad got off to a slow start and lost to Fairview, 5332, during the Scobey Invitational on Friday, Dec. 9.

The Lions fell behind by a 17-6 margin in the first quarter and trailed 24-14 at the half.

Lustre scored eight points in the third quarter. The period ended with Fairview holding a 40-22 advantage.

Alexa Reddig accounted for 20 of Lustre’s points. Also scoring were Aubri Holzrichter with seven and Grace Brown with five points.

Top scorers for Fairview were Macy Tjelde with 18 and Carly Buxbaum with 15 points.