Wolf Point’s Boys Aim To Contend In District 2B 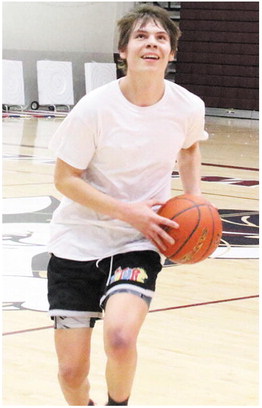 With five returning players who started last season, Wolf Point’s boys’ basketball squad is excited about the possibilities for the upcoming season.

Cole Hanks is the program’s head coach after serving as an assistant for 11 years. The Wolves started practice on Thursday, Nov. 15.

“I’ve been here quite a while,” Hanks laughed. “Being the head coach is something new for me, but I’m excited for the new challenge.”

There won’t be a lot of different things for the Wolves, especially early in the season. “Troy {Blount} did a great job preparing these boys. We will be ready,” Hanks said.

“We have some great senior leaders. I think we will be tough with our starting five,” Hanks said. “We have a bunch of juniors who could play big roles and a couple of sophomores who could help. They need to gain experience.”

The Wolves will feature some height including possibly DJ Fischer at 6-3 and Logan Brown at 6-3. “But they’re young, they’re green,” Hanks said.

Hanks said the Wolves will use multiple offenses and an up-tempo defense.

This is the first season for a shot clock during Montana’s high school games.

“I don’t think it will effect us much, since we play fast anyhow,” Hanks said of the shot clock. It could change strategy near the end of close games though.

The Wolves will open their season at home against Glasgow on Friday, Dec. 2.

“We’ve been pretty good rivals for as long as I can remember,” Hanks, a 2004 graduate of Wolf Point High School, said about the Scotties.

Hanks sees Malta as the pre-season favorite in District 2B.

“After that, it’s wide open,” he said. “Glasgow returns some starters. Poplar returns quite a few starters. I think we will be right in the mix.”

The district tournament is scheduled for Feb. 16-18 in Malta. The divisional tourney is March 2-4 in Shelby.