Election day is Tuesday, Nov. 8. The following are responses by the candidates to answers asked by this newspaper.

What experience do you have that your feel would benefit you if you are elected sheriff?

Frederick: I have worked at the Roosevelt County Sheriff’s Office for the last 22 years and have been the sheriff since 2014. Before the RCSO, I served as a police officer for the City of Poplar and the Fort Peck Tribes, giving me a total of almost 25 years of experience as a certified peace officer in this county. I have held every rank at the RCSO, including patrol deputy, sergeant, chief deputy and undersheriff. Additionally, I have received hundreds of hours of specialized law enforcement training and am also the Roosevelt County coroner. My years at the RCSO have given me the experience necessary to fully understand how all the different departments of the office operate and relate to each other. This allows me to effectively manage not only the patrol side of the office, but also dispatch, civil process, search and rescue, courtroom security, transports, gun permits, coroner’s office, and the detention center. I am currently one of only five sheriffs elected to serve on the Board of Directors for the Montana Sheriffs and Peace Officers Association. Outside the RCSO, I have also served my community as a Poplar city councilman and chief of the Poplar Volunteer Fire Department. I have several years of experience working with the youth through coaching and refereeing.

Nygard: I have 20 plus years of successful experience in running my own farming business. I complete yearly balance sheets and projections and administer the budget accordingly. I grew up in Brockton and Poplar and have lived in Wolf Point for the last 11 years. I know the people and the area. My parents have been great role models for me and taught me the value of integrity, professionalism, responsibility, caring for others and doing the right thing morally and ethically. I have coached for 14 years and just completed my 13th year as a basketball referee. Throughout my life experiences, I have established many positive relationships and know that communication is key to build and maintain vital partnerships for the sheriff’s office. Experience is something that you shouldn’t solely run for office on, if you have experience then the accomplishments and statistics of what you’ve accomplished speaks for itself. Experience doesn’t always get the job done, but a hard work ethic, teamwork and doing the right thing will go a long ways.

What efforts do you feel are working or can work to reduce drug activity in the county?

Nygard: This is one of the issues that I am most passionate about and made me put my name in for sheriff. I feel the efforts to curb drugs in the last eight years have not been sufficient. In the last three months, a task force has been created and this is a good thing, but should have been done sooner. The lack of unity between forces right now and in the past several years has not served us well in addressing the drug problem in our county.

Frederick: The Safe Trails Task Force is now up and running and is successfully going after violent criminals and drug dealers on the Reservation. The STTF is a collaboration between the FBI, RCSO, BIA, Fort Peck Tribal Police and other law enforcement agencies to combat drug crimes and related violence in Indian Country. It was initially announced in 2018, but soon became stalled by bureaucracy until I reached out to Sen. Steve Daines who then cut through all the red tape and got the ball rolling. I have assigned one deputy full-time to the STTF. So far, the STTF has been responsible for the arrests of several methamphetamine and fentanyl dealers in our area. These arrests are making a real impact and taking dangerous criminals off the streets. I have also added a drug-detecting K9 to the RCSO. “Hati” is trained to sniff out several different types of narcotics and has already proven herself to be a huge asset in our battle against drugs in Roosevelt County. In addition to detecting drugs, Hati is also trained to track humans and has successfully located lost children and escaped jail inmates. Hati has been such a huge success that I am in the process of acquiring the funding for an additional K9. Most RCSO deputies have received specialized drug interdiction training and I encourage them to be proactive. This means they are out there making traffic stops and actively looking to get drugs off the street. Several felony drug arrests have been made as a result. These arrests have been made in every part of our county. On the preventive side, my office has teamed with the National Child Safety Council to distribute educational material and work closely with area schools to encourage children to stay away from illegal drugs. Deputies also visit the schools on a regular basis to check with staff and help where needed.

What do you view as the biggest challenges’ facing the sheriff’s office?

Frederick: While the RCSO is making big strides in this area, our biggest challenge remains drugs and, more specifically, the recent influx of fentanyl in our area. Fentanyl has hit all of Montana hard but the impact seems to be more pronounced in rural areas like Northeast Montana, where we lack a lot of the necessary resources and manpower to effectively deal with it. This is a problem that requires a trained, experienced law enforcement officer to develop an effective strategy to go after the dealers bringing this poison into our county. This is also a problem that cannot be solved by law enforcement alone; it takes a community willing to work with the police to take our towns back from these drug dealers. It also takes courts and prosecutors that are willing to dole out strong punishment for those convicted of peddling poison to our people. Staffing has been one of the biggest challenges for the RCSO in recent years. Like everyone else, we were hit hard by the pandemic and associated quarantine issues, but we also struggled with budget cuts, injuries and illnesses. Since I was elected in 2014, the RCSO has lost four deputy positions due to budget cuts, leaving us with nine deputies to cover the almost 2,400 square miles of Roosevelt County. It’s easy to see how losing even a small number of deputies due to quarantine, injury or illness could seriously impact our ability to provide the coverage we need. The staffing situation has recently improved, though, and we are now fully staffed and have regained one of the four deputy positions lost to budget cuts. It’s also important to point out the jurisdiction of the sheriff’s office. While we have arrest and investigation authority anywhere in the county, we are primarily tasked with patrolling the rural areas of the county and providing contractually obligated coverage to the communities of Froid, Bainville and Culbertson. The town of Wolf Point has its own police force and they are responsible for calls within the city limits. I am, however, a firm believer that ALL areas of our county deserve equal coverage, so I try to schedule the deputies in such a way that they are evenly spread out from one side of the county to the other. This means I have deputies assigned to assist WPPD with calls when they are busy or shortstaffed. Providing 24-hour coverage for the entire county with the relatively small number of deputies available is a challenge, but we are getting there. I would just like to remind the public that sometimes we only have one or two deputies on shift and response times can be slower than we would like. So far this year, deputies have responded to over 1,400 calls for service, and that number doesn’t include all the other duties deputies are responsible for, such as prisoner transports, court duty, coroner calls, search and rescue, and civil process service. Bear in mind also that nearly every call for service requires some kind of written report and associated paperwork.

Nygard: Some of the biggest challenges facing the sheriff’s office is the lack of coverage throughout the whole county. This has to do with how you budget your money, where you have your deputies, where you put them to work, the lack of a coordinated effort among forces makes

Jason Frederick (left) and Brent Nygard (right) are on the ballot for Roosevelt County sheriff. 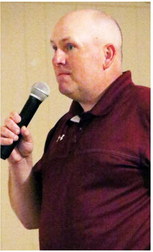