Shakespeare In The Schools Comes To Wolf Point

Students of Wolf Point Fligh School and Wolf Point Junior Fligh School were entertained with a performance of “Macbeth” from the Montana Shakespeare in the Schools program on Wednesday, Oct. 12.

Montana Shakespeare in the Schools program started in the state 30 years ago. The program has growi to include more than 50 schools and reaches more than 12,000 students.

Before performing in Wolf Point on Wednesday, the group entertained in Sidney on Tuesday, Oct. 11. The group performed in Scobey on Thursday, Oct. 13. The tour’s schedule for the rest of 2022 includes many schools in Wyoming and Montana.

As far as the performance of the great tragedy “Mac-Beth,” director Susan Felder noted, “The play offers an opportunity for us to look at our own choices. What are we willing to justify for what we want? In the face of frustration and feelings of unfairness, do we sometimes find ways to ignore wrong or harmful choices?”

The mission of Montana Shakespeare in the Parks is to engage and enrich both rural and underserved communities with professional productions of Shakespeare and other classics and, through educational outreach, to inspire creative expression and appreciation of the arts in young audiences.

The three witches, or Weird sisters, discuss a plan during the performance in Wolf Point.

Actors of the Montana Shakespeare of Point High School on Wednesday, Oct. 12. the Schools program perform at Wolf (Photo by BillVander Week) 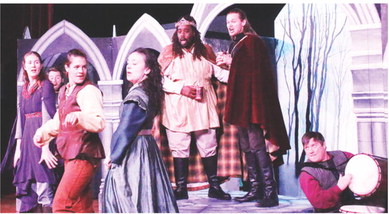