Cowgirls Put Up Fight Against Mavericks

The Culbertson Cowgirls put together one of their best volleyball matches of the season in giving a strong North Country team a battle at home on Saturday, Oct. 15.

After falling behind by an 8-4 margin in the first set, the Cowgirls stormed back for a 10-8 lead on kills by Destiny Thompson and a spike by Leandra Perkins. Two aces by Thompson put Culbertson up 14-10. The powerful hitting of 6-2 Teagan Erickson kept North Country close, but kills by Makena Hauge and Perkins put the Cowgirls up 23-17. An ace by Jazzmin Fugere increased the gap to 24-17.

The Mavericks got as close as 24-21 on kills by Paige Wasson and Kendall Scheffelmear, but Culbertson then scored for the 25-21 final.

After North Country gained a 7-1 advantage in the second set, the hard hitting of Hauge pulled the Cowgirls to 8-7. A pair of aces by Hauge produced a 10-9 lead.

The Mavericks gained a 1612 lead, but a spike by Perla Burciaga and a hit by Hauge kept Culbertson close. Kills by Erickson and an ace by Kora LaBrie led North Country to a 22-15 lead.

Kills by Thompson put the Cowgirls ahead by a 10-8 margin in the third set. After the Mavericks earned a 17-15 lead, the Cowgirls ran off three straight points on an ace by Hauge, a kill by Thompson and a block by Fugere.

North County scored on a block by Mattea McColly and a kill by Wasson down the stretch to take a 25-19 win.

In the fourth set, the net play of Wasson highlighted action as North Country gained a 17-5 advantage. The Cowgirls battled back to 17-10 on a backrow kill by Hauge, a kill by Thompson and a block by Burciaga.

The Mavericks increased the gap to 22-11. After a kill by Perkins, North Country used kills by Erickson for a 25-16 victory.

Makena Hauge tips the ball over the net. 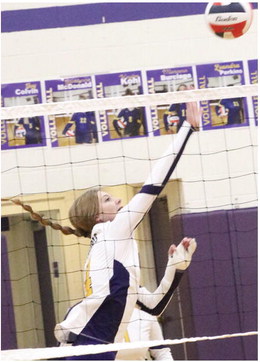