I would like to clear up a few misleading statements in the James Walling article in the September 1, 2022. Culbertson Community News. It is unfortunate that Mr. Walling did not reach out to me for information prior to publishing, but in the times we live in, its not unusual to see only one half of the story.

During the lengthy private property disputes between the American Legion and the Knudsen Family Limited Partnership (KFLP) a previously unknown and unimproved county road right of way (ROW) was discovered. This ROW dates back to the early 1900â€™s and has been named Valley Co. Road 97 or just County Road 97. It was generally stated that since a county ROW is public property, by default it becomes part of any public access route. This ROW runs parallel to the road that was built by KFLP for farm field access and is literally just a few feet away.

In the fall of 2021 and the following spring of 2022, KFLP began clearing the county road ROW in anticipation of county road construction. The perimeter fence was removed, trees were felled and roots removed, and all the grassy vegetation was removed. The barest amount of earthwork was also completed, but we need a few rain showers before the road way can be packed. KFLP also put a temporary perimeter border between the ROW and our existing road, knowing that a permanent fence will be needed.

The Road 97 access is connected directly to the County Road 1020 and remains WIDE OPEN with no gates or impediments. It should be noted that the road prep work that KFLP completed was done prior to the final Supreme Court judgment.

In the weeks following the most recent court decision, the main access gates to KFLP property have been moved off the Road 97 ROW and are now relocated entirely on KFLPâ€™s privately built road. Unfortunately the gate photo that was printed is an old one and deceptive. Located immediately to the left of the old gate post is a 60 foot opening and the beginning of Road 97.

Regarding the second photo that was submitted, yes there are 2 pieces of farm equipment sitting near a gate that leads to a sugar beet field road. Again, deceptive photography. What is not seen is the access road immediately to the left of the farm equipment, inside the fenceline, that leads DIRECTLY to the Legion property. There are no gates to open, other than the Legionâ€™s perimeter gate. KFLPâ€™s property is a working farm and there will continue to be farm equipment on and around the access roads. There being no need for anyone other than KFLPâ€™s farmers to access the agricultural fields, parking equipment near the field gate is hardly an egregious action.

Since the September court ruling, KFLP has been working diligently to move our agricultural operation buildings, fences and gates so that in no way can they be deemed an access impediment. Honestly, in the past weeks there have been many Legionnaires on our property who can attest to work we have undertaken. We have not yet completed all of the moving and fencing, but this takes time. To say that the Knudsens are thumbing their noses at the courts, is blatantly a false and inflammatory statement.

A bit of background. This private property rights/ public access issue has a long history. The disagreement started over 50 years ago, long before KFLP owned the property. KFLP inherited the argument when the property was purchased.

Another major complication in the legal wrangling was the City of Culbertsonâ€™s attempt to quiet title a 1903 water pipeline easement, thereby converting it to a road. Because we are a constitutional republic the way that we settle legal arguments is in the court system. And that is what has happened. KFLP acknowledges the court decisions and will do our best to accomplish the court orders. In Mr. Wallingâ€™s editorial, there is a question about why I as a publicly elected official have not made a public comment about this long drawn out, contentious court proceeding. And I can answer that easily. First, it is highly irregular to talk publicly about cases while they are being litigated. Most attorneys will tell you that. Secondly, as a State Representative official, I felt it improper to discuss my private legal case in the realm of public office.

The KFLPâ€™s private property dispute is over. We acknowledge the court orders and are attempting to work through them. Itâ€™s time for a new chapter. KFLP has no animus toward the Legion and wishes them the best for their future endeavors. ~ Rhonda Knudsen 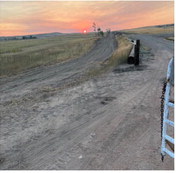