The Wolf Point football program is excited about the opportunity to take the next steps for success on the field this fall.

The Wolves started practice with 25 players on Friday, Aug. 12.

The Wolves, who earned victories at both home and on the road last season, will be led by six seniors. Those seniors include Trevin Boysun, Corey Martell, Gaige Bushman, Kraven Silk, Juliun Benson and Kelby Bauer.

â€śWe have a lot of guys back who started games,â€ť Red Cloud said. â€śWe had really good numbers for our summer camps and mixers. Their attitudes are pretty good.â€ť

Returning starters for the Wolves include Martell at running back, Lennoxx Lilley on the line, Charles Page at fullback, Benson at quarterback, Boysun at center, Silk at wide receiver, Bushman at wide receiver, Michael Bell at linebacker and lineman Mitchell Brown.

Other players who saw a good amount of playing time last season include Maddox Reum, DJ Fischer and Logan Brown.

â€śMost of these upperclassmen have been playing together for years,â€ť Red Cloud said. â€śWeâ€™re expecting to come out and play good, hard football.â€ť

One of the teamâ€™s benefits is having Benson being in his second year playing quarterback for the Wolves.

Red Cloud notes that he feels more comfortable in his second year as the programâ€™s head coach. Returning assistant coaches are Scott Montgomery, John Gardner and Frank Benson. Rodney Chavez has been added to the coaching staff.

â€śWe feel better. We retained a lot of the kids,â€ť Red Cloud said.

He expects Glasgow, Fairfield and Malta to be among the conference contenders.

This yearâ€™s schedule feature less travel for the Wolves. Wolf Pointâ€™s away games include contests at Malta and Glasgow.

The Wolves will open their season at Baker on Sept. 2. Wolf Pointâ€™s first home game is against Roundup on Sept. 9. Wolf Pointâ€™s maroon and white scrimmage will begin at 7 p.m. on Thursday, Aug. 25. 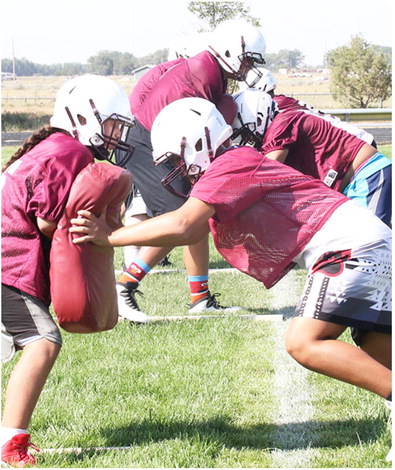 Line PlayWolf Pointâ€™s linemen work on their blocking techniques during the first day of practice on Friday, Aug. 12. The maroon/white scrimmage is schedule for 7 p.m. on Aug. 25.(Photo by Bill Vander Weele)