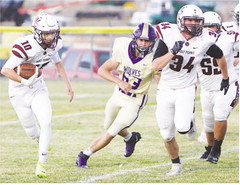 Competitive sports have a lot to offer young people. In addition to exposing children to the thrill of competition, competitive sports can set a foundation for a lifetime of healthy living. One study published in the American Journal of Preventive Medicine in 2014 found that afterschool physical activity programs were the most effective strategy to reduce childhood obesity among children between the ages of six and 12.

Competitive sports also teaches valuable lessons about humility and respect. Sportsmanship is a vital and valuable component of competitive sports, and that’s a lesson no athlete is too young to learn. Coaches and parents can work together to emphasize these principles of sportsmanship to young athletes.

Always respect officials. In the era of instant replay in professional sports, criticism of officials has become more common. Such criticism can easily move from the professional to the amateur arena if players are not taught to always respect the officials. Unfortunately, many amateur sports officials continue to be the victims of overaggressive behavior on the parts of coaches, parents and athletes, and many have simply chosen to walk away rather than subject themselves to abuse. Estimates from the National Association of Sports Officials indicates that the group’s membership has dropped by more than 20 percent since March 2020. Coaches and parents can practice what they preach when teaching young athletes to respect officials at all times, regardless of how games unfold on the playing field.

Respect the rules. Respect for officials should coexist with respect for the game itself. Every game has rules, and knowing and adhering to those rules is a vital component of good sportsm anship.

Coaches and parents can set the tone for this by enc o u ra ging kids to play by the rules during the games, but also by adhering to rules governing practice times and offseason workouts when no one is watching too closely.

Respect opponents. Showing respect for opponents is another principle of good sportsmanship. Social media provides a readily available platform for athletes to disparage their opponents before and after games. Such platforms have even proven too tempting to resist for some professional athletes. But showing respect for opponents, even in defeat, illustrates to parents and coaches that young athletes are mature and cognizant of the fact that participation in sports requires good sportsmanship.

Respect coaches. Good sportsmanship also involves respecting coaches, even when they make decisions players and their parents do not necessarily agree with. That respect has been dwindling in recent years, and it’s contributing to a coaching shortage in youth sports. One survey of more than 200 coaches in the Syracuse, N.Y., area found that nearly 60 percent of coaches had considered quitting over conflicts with parents. Many coaches volunteer their time to teach young people the game, and players should be taught to respect coaches at all times. That includes those times when players feel like they aren’t getting enough playing time or when they disagree with coaches’ ingame decisions. Sportsmanship is a vital component of sports participation. Teaching young athletes the principles of sportsmanship adds one more unique benefit to sports participation.