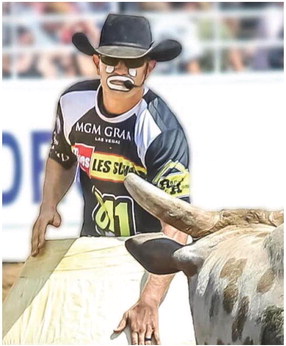 After missing the Wolf Point Wild Horse Stampede for the past few years, barrelman/rodeo clown JJ Harrison is excited to make his return to northeastern Montana at this year’s Stampede.

“It’s one of my son’s favorite rodeos,” Harrison said. “He remembers a lady at the Wolf Point Cafe who gave him a great milk shake and he’s never forgotten it.”

The Stampede is also one of Harrison’s favorite places to entertain.

“I love the crowd there. They like my brand of comedy,” he said. “It’s a great community. The committee works hard to give a quality show.”

Harrison has performed throughout the United States including at the National Finals Rodeo and from Florida to Hawaii.

“I’m an entertainer,” Harrison said. “I want to make people happy and enjoy our sport.”

His rodeo career started at the high school level where he competed in bull riding, bronc riding and roping. Harrison then achieved success for Washington State University’s rodeo team.

After college, he served as a middle school science teacher for eight years, but he felt an urge to return to rodeo arenas.

“I always taught the kids to find something you love to do for a career, and I decided to take that advice,” Harrison said.

He has no regrets for his decision.

“This job has been very good to me,” Harrison said.

The last time he came to Wolf Point, it was just Harrison and his son. After getting married, his crew has increased in size.

“Now, I’m bringing my wife and baby and three other kids,” Harrison said.

He also spreads the word about 811 and about farm/ranch safety and the importance of calling before you dig.