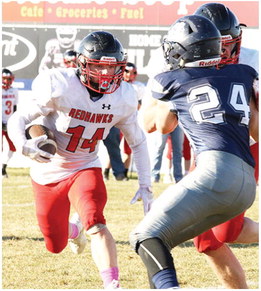 The top six-man football players in two nations will battle it out during the Can-Am Bowl in Lambert on Monday, July 4.

Local organizer Jim Miller, who is a former head coach and now an assistant for the Richey/Lambert Fusion, believes this is the first time that the game will take place in the United States.

The United States’ team will consist of 14 players including athletes from Montana, Texas, Colorado, Wyoming and Nebraska.

The players from Montana are Ashdyn Hobbs of Froid/ Lake, Sterling Thiel of Savage, Brett Mullin of Richey/ Lambert and Chance Goltz of Bridger.

The Canada squad will feature 23 players.

Kickoff is scheduled for 6 p.m. A tailgate party is scheduled to start at 4:30 p.m. on game day. Hamburgers and hot dogs will be available. Shorty’s of Richey will sponsor a beer garden.

A banquet is planned for Sunday, July 3, in Lambert’s new gym beginning at 6:30 p.m. The night will feature a roast beef dinner and a presentation by guest speaker