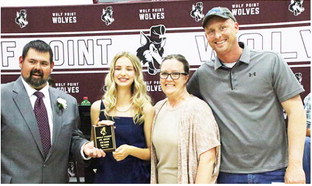 Wolf Point’s eighth-grade promotion featured 47 students moving from the eighth grade to the high school on Tuesday, May 31.

The program included a presentation of tribal incentives. An honor song was performed by Donovan “Beefy” Archambeault and Nakoa Heavy Runner.