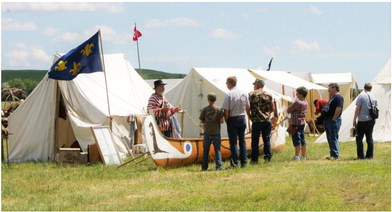 The Fort Union Rendezvous is set for June 16-19, 2022. The National Parks Service is hosting a 19th Century Fur Trade Fair that includes a variety of period arts, crafts and music. Members of the public are invited to come and participate in the upper Missouri fur trade fair reenactment at one of the West’s most imposing historic sites. The annual gathering is the site’s largest event. Fort Union comes alive with over 100 reenactors from across the country and Canada demonstrating traditional skills and lifeways.

Each day will feature a variety of speakers and demonstrators. As well as an array of trade goods, which will be presented in Fort Union’s Trade House.

Thursday June 16 is Kids Day from 10 a.m. to 2 p.m. Many favorite demonstrators are returning.

The staff at Fort Union Trading Post seek an historically accurate depiction of life at Fort Union Trading Post during the events. To that end, certain standards are expected of all participants. According to a NPS press release, “We concentrate on the period 1828-1867. Clothing, camp equipment and materials should be representative of that period. The primary focus of Rendezvous events is to portray and re-create of historic lifeways and material culture;n including activities, camping equipment, fashion and weapons, common on the Northern Plains during Fort Union’s period of significance. We ask that you make friendly, personal contacts with our visitors. Such contacts will help create an interactive learning event.”

All participants must sign a VIP volunteer agreement in order to participate and/or camp at Rendezvous.

Interpretive themes are intended to illustrate the interactions between American Indians from the Upper Missouri Tribes (Assiniboine, Crow, Blackfeet, Mandan, Hidatsa, Arikara and Lakota and Dakota Sioux), other tribes and Euro-Americans (American Fur Company employees, trappers, independent traders, hunters, rivermen, missionaries, slaves, visiting artists and scientists, military personnel, etc.) and among Euro- Americans who lived in, worked or traded at, or visited Fort Union in the early to mid-19th century.

This event is cosponsored by NPS and the Friends of Fort Union Trading Post, of Williston. The Fort Union Muzzle Loaders Association will assist the Park Service in policing the camp sites.