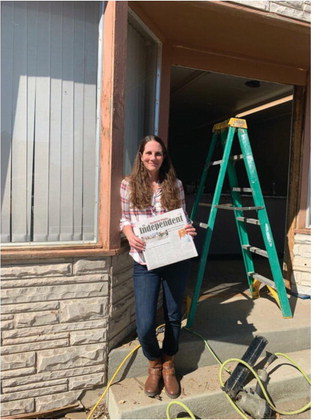 Last Tuesday afternoon, Northern Plains Independent publisher and owner Darla Downs was just finishing up the touches on that week’s newspaper, amidst the sawing, hammering and air compressors just a few feet away from her office. A new front door was replacing the rotten old one.

A few weeks before, new flooring, which had been on order for several months, got installed.

Just the week before, she had crawled through an 18-inch opening beneath the building that was constructed in the 1890s to string computer ethernet cable and wiring. No other member of the staff could quite squeeze into the cobwebbed crawlspace.

What some people will do for a newspaper.

But that dusty crawl or the new front door to the office is small compared to the two-year journey to save her hometown newspaper, something that’s been in her family for four generations.

For years, the Downs’ family had worked at the paper and worked for the publisher, John Stanislaw Sr. after the family sold the business to Stanislaw in 1999. But with his death in 2018, Kathie Stanislaw, John’s widow, decided to change the structure of the paper, at first attempting to offer Downs significantly less money to be the publisher in a move Downs claims in court documents was an effort to get rid of her.

The Stanislaws owned 80 percent of the paper, but Downs owned 20 percent.

Instead, citing financial concerns, Stanislaw shuttered The Herald- News, closing the offices and ostensibly leaving the community in northeastern Montana to turn into a news desert. The Poynter Institute of Journalism estimates that since 2004, more than 1,800 newspapers have shuttered, most of them weekly community newspapers serving small areas like Wolf Point and Poplar.

Downs was determined not to let that happen in northeastern Montana, and started her own newspaper, the Northern Plains Independent, not missing a single deadline, producing the new publication from a couple of laptops, and even calling the phone company to get the old office line which had been given up when the office closed.

Except for the name change, the community news never missed a beat as the advertisers and subscribers rallied. For two years, she fought for what she said she was owed, and waged a fight to keep the paper anchored there. She gave the publication its own name, though.

“We are now back where we started, making up all the circulation numbers,” Downs said.

When Stanislaw shuttered the paper, it left behind the name of the old publication, two old buildings and a number of debts. Downs learned that Stanislaw was contemplating bankruptcy. That’s when Downs made her offer: She purchased the rights to the paper and the building for the debt. And almost as suddenly as her career with the paper ended, Downs wound up right back where she’d began — but now in full control of the publication.

The old office space for the new newspaper had been closed for two years. It had been broken into, so the loading door had been covered with plywood. Two years of not shoveling the office steps had rotted the front door nearly off its frame.

But the paper’s office, where Downs had grown up with her parents pushing to make deadline, was the same. It’s a few doors down from the Prairie Cinema and KVCK, “The Wolf.” Across the tracks, is an Amtrak station for Wolf Point, which runs across the state’s “Hi-Line.”

Downs has kept some things the same, the publication day, the love of the community, but other things have her fingerprint, a testament to the ways she’s had to fight to keep the weekly paper alive. The publication will keep the Northern Plains Independent’s name. The flooring and doors are new. Some of the printing equipment is heading to a printing company in Glasgow. A few pieces will stay with her.

The printing building, connected to the older historic office, will be converted into an accounting office. During the three years she’s struck out on her own, Downs earned a master’s degree in accounting.

But the paper will be hers in one other way besides ownership. Her daughter, Katie Smith, recently moved back from Denver, Colo., to her hometown to keep the family in the family business. Smith is gradually learning more of the business, and her presence gives Downs something she hasn’t had a lot of since 2019 — a peace of mind. Downs’ youngest daughter, Jessica Smith, is headed off to college this fall, but plans to work remotely to continue helping publish the newspaper each week. She’s worked for newspaper for the past three years and helped start the Independent two years ago.

Downs continues to fight in an industry in which most people are fleeing. The Boston Globe recently noted the newspaper industry has averaged more than 1,000 job losses a month for several years, decimating the ranks of journalists and leaving notable institutions like city councils and school boards uncovered.

Downs said it’s the power of local community support and local ownership which has helped her thrive. She said that she’s able to provide the community with what it wants — news of birthdays and anniversaries along with keeping a watchful eye on city and county government.

And, she was able to rebuild the entire 1,450 subscriber base in just two years, proof that there is true hunger for the news.

On her desk, between the keyboard and the monitor, sits a pile of yellow office sticky notes. They are messages she’s received from people who are trying to find information contained somewhere in the archives of The Herald-News. For several years, she has had to disappoint many of them by saying she couldn’t get to the archives — still locked away in a building she no longer had access to. But, a couple of weeks ago, when she got back in, got power restored, she found the back editions, piled behind boxes of clutter.

“Now I have access, we’re just waiting until we can go through them,” Downs said.

Somewhere floating around the office is a picture of a 3-year-old Downs who crawled inside a paper box to take a nap as her father, who died several years ago, worked the presses to put out a paper.

“I think he’d be satisfied,” Downs said of the outcome. “He’d be happy that the good ones won.”

“We’ve got it nice and the way it should be,” Downs said.

Her fight for the paper has left her more dedicated to the community.

“You know, you do what you have to do to keep it going and so many people have said that they’re proud of me and want to keep it going. They’ve asked, ‘What can we do to help?’” The answer is usually a form of just keep doing what you’re doing — advertise, read, subscribe. And though the industry has been brutal, Downs remains upbeat and confident for the future.

“Hyperlocal news is still important to communities. Very rarely would you get a TV station to come and do a story in a rural area that’s not attached to a larger community,” Downs said. “The community is not directly served, but the residents want to know who is doing what, and that’s important to them. They’re not going to get it from TV, but only from a local newspaper.”

Now, a local newspaper that has the next generation working at it.

“It makes me take a sigh of relief that this is interesting to the next generation,” Downs said. “That she’s here and invested in the community and will be ready to take it over when I retire in 20 years.”

So much from the name to the staff to location has changed, including moving out of offices twice. Still, putting the paper out from the building across the street from the fire station wasn’t odd or painful, even though the battle to keep the paper took several years.

“It feels like home,” Downs said. “Now, I know I can work for its future.”