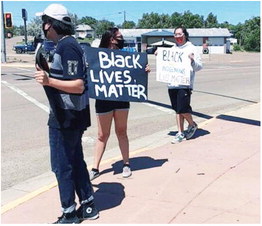 A handful of protesters ages 14-40 held signs featuring “Black Lives Matter” and “Indigenous Lives Matter” on Third Avenue South near the stoplight and at the Third Avenue/U.S. Highway 2 intersection in Wolf Point July 3-4. Nineteen year-old protester Alexis Payne, of Wolf Point, told the Northern Plains Independent that the actions were a show of solidarity with Black Lives Matter protests nationwide following the killing of George Floyd in Minneapolis at the hands of police May 25. Payne was joined by Wolf Point’s Swaya Barrera and Precious Iron Cloud on Friday. The group made signs and engaged motorists and pedestrians from the sidewalk for several hours. Their ranks were swelled in the afternoon Saturday by the addition of local residents Grace First, Melissa Stone, Carrie Campbell, Gabriel Hansen and Snowy Romero, as well as at least four others. Scott Johnson (left to right), Snowy Romero and Alexis Payne protested in solidarity with Black Lives Matter in Wolf Point July 7. (Submitted photo)