Johnson To Show Works At Bryan’s 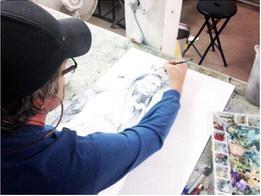 Local artist Lance Johnson is coming to town during Stampede weekend. He was to be a featured artist at Art in the Park, which was canceled late last week. He’ll be painting at Bryan’s most of the day Friday and Saturday.

Johnson grew up in Wolf Point and was drawn to art at an early age by his mother, who also was an artist. He graduated from Eastern Montana College with a double major in art and art education. He studied under artists Ben Steele, Neil Jussila and John Pollock. He works as a full time artist in his Billings studio and gallery, with a focus on watercolors and oils.

Johnson told the Northern Plains Independent that he stays busy conducting workshops and traveling to art shows throughout the region. His work has been selected by numerous regional juried shows.

Johnson will be setting up at Bryan’s downtown on Friday and Saturday from 9 a.m. to 5:30 p.m.

Said Johnson, “It will be great to catch up with old friends and meet some new ones!”