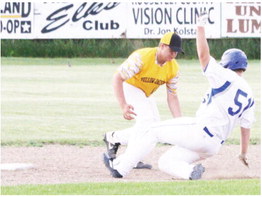 The Yellow Jackets “A” and “B” squads have posted several wins and close loses, stinging some opponents.

“The kids are doing great. They are starting to play as a team,” A team head coach Aaron Snyder said.

“I think if we can continue down a positive path we will grow as a whole unit,” he said.

“They have made immense

improvements in both fielding and hitting. They are really coming together as a team. We have a lot of strong athletes and we are excited for the upcoming tournament,” he said.