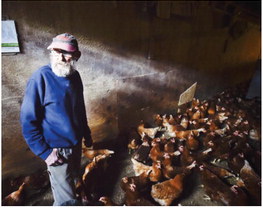 The 68-year-old old poultry farmer pointed out the hen houses he built decades ago, providing details of each wooden tenement's residents.

Hugh Spencer built the hen houses and accompanying grain bins, which look like high-density housing for chickens, shortly after he and his wife, Viki, purchased the land in 1981.

Spencer makes the walk from his and his wife's stately home only a few miles north of Plains, collecting the fruit of his and his hens' mutual labor, three times daily. The eggs are sold under the Spencer's Valley View Farm label.

For health reasons, Spencer changes his boots before entering each hen house. While he may have given little thought to this precaution 20 years ago, he is quick to point out its importance now.

He mentioned 'bio security' frequently. His main concern is not for his bottom line, but for the birds themselves.

'When they come in a day old, I'm up every couple of hours for the first few nights until they get completely settled in,' Spencer said at a slow, deliberate pace. 'You know, I pretty much live with them. It’s a matter of, you know, give them the very best care you can.'

He said it is important that his chickens live 'a chicken life.'

That way of thinking about raising chickens is less common in today's corporate world. Poultry farms of Spencer's size — his farm is home to about 6,000 chickens — are rare birds in the United States.

According to the U.S. Department of Agriculture's 2017 Census of Agriculture, there were 513 poultry farms with between 3,199 and 10,000 animals in operation across the country. There were just nine in Montana at that time.

'That's the reality of egg production in the U.S.,' Spencer said. 'I'm the exception.'

Spencer's career in poultry began on his eighth birthday. His father, a poultry farmer in upstate New York, gave him some chicks as a present. He has been raising birds ever since, the first 25 years of which were for fly-tying purposes only. Years later, following a family road trip out West, Spencer came to the realization he wanted to move to the Rockies.

Fast forward to 1981. Spencer and his Montana-born wife were among the first to close on one of the 80-acre parcels situated below Deemer Peak and above the Clark Fork Valley.

'Starting out as a young couple, being able to line up enough money to buy a farm can be tricky,' Spencer said. 'We figured out a way to do it.'

They built a home, a successful business and a happy family. Spencer said the ability to work so closely with his wife and two children has been one of the best aspects of his career.

His wife also ran a daycare for the community while their children were younger.

But chasing children and chickens around 80 acres will always be a young person's game, and Spencer reluctantly admits as much.

'Ag has been a great living for us, a great way to raise a family,' Spencer said. 'If I were younger, I'd do it again.'

The kids grew up and moved away to pursue other careers, and the gray-bearded farmer said he plans on retiring in two years. He hopes to sell the operation and move to Missoula to be closer to his grandchildren.

His only problem is the apparent lack of demand for a rural Montana poultry farm. 'I haven't had anybody beat down my door,' he said.

He said large-scale corporations would not have much use for his land and facilities. He could probably sell to a land developer, but he would rather see the property that gave his family so much do the same for another upstart couple.

As an aging Montana aging agricultural producer, Spencer is in good company.

More than half of all ag producers in the state are either past or close to retirement age.

Julia Haggerty, who teaches economic and human geography at Montana State University, said a number of reasons factor into the industry's aging trend.

'But two that I would point to are the trend toward individual properties becoming larger and individual operations needing less labor, which makes it possible and sometimes necessary for an individual owner to stick around longer,' Haggerty said. 'And that is connected to and tied into challenges in transferring a property within a family, which can be economically challenging and fits within the challenge of recruiting young — what we call emerging — farmers and ranchers back to their property. So you get social and economic factors tied into that, and it contributes to an aging median age for farmers and ranchers in this state.'

Just like Spencer, many Montana farmers and ranchers do not have children interested in taking over the family business, leaving little to no choice but to sell the land to developers or agriculture corporations.

Haggerty said there is a large contingent of aging producers who are opposed to selling out to corporations, and thereby depleting the state's access to locally grown and raised ag products. That group has demonstrated a commitment to bringing the next generation into the fold.

'In fact, many transitioning farmers and ranchers show that they're willing to do something else because they feel so strongly about keeping properties in agriculture and because they’re committed to emerging producers,' she said. Another barrier preventing that passing of the torch is land prices. The USDA reports the average price per acre of farmland nationwide has risen nearly $500 from 2012 to 2017.

The cost alone can be prohibitive for young producers.

Connecting With Young Buyers Missoula resident Ellie Costello grows vegetables she incorporates into soups that she sells. She also grows garlic and flowers. She has been growing the vegetables on other people’s land, devising rental agreements with each landowner, which does not always work out well.

There is also a concern over infrastructure. Does the property have a wash house? Can she store the produce? Is there housing for her on the land, or will she have to continue renting in Missoula?

'It's those reasons that make me really want to invest in my own land, and I know that could look like a lot of different things,' Costello said. 'I don't have one specific 'this is the perfect plot for me' — perfect size, perfect location. It gives me more opportunities to say yes to something.'

The young farmer said she was so desperate for her own land that at one point she nearly purchased a small parcel near Missoula with a cabin that smelled so strongly of rodent excrement that 'you thought you should throw away your shoes when you were done being in there.'

The cabin sits on about an acre of land near Clinton and would have cost her less than $200,000, a modest enough price that Costello felt she could carry the note by selling soup. But while she was researching ways to mitigate the cabin's many flaws and how best to fund those efforts, the property was sold.

'And that’s my property that got away that somebody else purchased before I could get to it,' Costello said.

Dave Renn is the Beginning Farmers and Ranchers Program director for the Community Food and Agriculture Coalition. CFAC is a Missoula-based, statewide nonprofit that, among many other endeavors, is attempting to connect landowners looking to transition out of the agriculture industry with emerging producers in need of land.

Renn said one of the big- gest reasons for the disconnect is that land deals within Montana's agriculture industry often involve verbal contracts. For instance, so-and-so attends the same church as soand- so, and they got to talking.

'Deals in agriculture tend to be a handshake,' Renn said. 'There's an element of trust involved.'

CFAC and other nonprofit organizations, in an attempt to facilitate land deals between retiring producers and emerging producers, created Land Link in 2006. About six years ago, the program was moved entirely online and under the control of CFAC.

CFAC's website says Land Link has 'provided a forum for many conversations between these parties and has helped many beginning farmers begin their land search. Think of it as a Craigslist for like-minded folks!'

The program initially focused solely on Western Montana, but has since been expanded to incorporate the entire state.

'We're focusing on trying to help people make connections now, but we also have one eye on the future,' Renn said. 'We see this aging group of operators that are going to retire. So we’re also trying to build a foundation and have a useful tool ready to go when those farmers decide that they’re ready.'

'Prior to these five respondents who let us know they found land through our site, we knew of two matches over the preceding five years,' Renn said. 'That was all we had heard about, so really it's a big jump up for us. Five doesn't sound like that much, but we're really encouraged and excited to hear this is happening.'

Costello, who previously worked for CFAC, said she has tried unsuccessfully to find land through Land Link.

'I haven't found tons of success in actually acquiring land through that site yet. I keep actively looking at it,' she said.

It is not the only resource Costello is tapping into. She said there are plenty available.

Spencer is another user of CFAC's Land Link. He said he and his wife have just started the process of trying to sell Spencer's Valley View Farm.

While no one may be beating down his door just yet, he is confident his Land Link listing will do the trick.

'Somebody coming in wouldn't have to reinvent the wheel,' Spencer said. 'The wheel's already rolling and greased.'

Until someone comes along to take the reins of Spencer's 'turn-key operation,' he will continue tending to his beloved hens.

As he plodded his way between hen houses, Spencer smiled at the egg empire he and his wife built from the ground up.

'If I was younger, I'd put up another hen house,' he said.