Council Approves Country Showdown, Art In The Park During Stampede 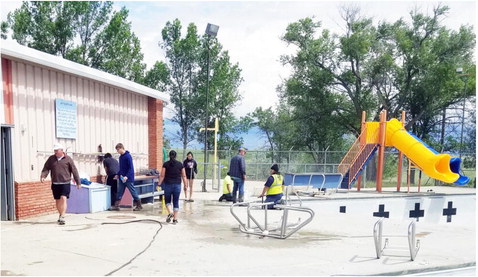 At its regular meeting Monday, June 15, the Wolf Point City Council approved requests for the KVCK Country Showdown and the Wolf Point Chamber of Commerce and Agriculture’s Art in the Park. Both events occur during the Wild Horse Stampede week.

Art in the Park received approval from the council to proceed with plans to hold their annual event downtown Wolf Point during Stampede weekend, Saturday, July 11.

The council also approved plans for a Stampede kickoff event, pending insurance coverage. The KVCK Country Showdown will start at 6 p.m., Wednesday, July 8. The performances are scheduled to run until dark.

City clerk/treasurer Marlene Mahlum has sent out tax deed notices for delinquent properties. The deadline to pay delinquent taxes is Aug. 3. Properties with more than three years unpaid taxes may be sold or taken over by the city.

The council approved an application for CARES Act funds for L.M. Clayton Airport in the amount $30,000. Public works director Ward Smith said traffic at the airport is slowly picking up.

Smith told the council that the Wolf Point pool is open and fully operational. Greg Lukasik with Great West Engineering said that further repairs to the pool will be made when necessary parts and supplies become available, possibly in the fall.

During planning board and board of adjustments, councilman John Plestina suggested writing a letter to Albertsons company’s headquarters inquiring about possible future plans for development and/or expansion at the Wolf Point Albertsons store location.

Wolf Point Police Chief Jeff Harada took questions about the department’s monthly activity report. The report states that WPPD has not filled the vacancy created by the retirement of Lieutenant Brian Erwin, leaving them short-staffed without an assistant administrator. There were 511 calls for service and 49 arrest and/or citations for the month of May.

During sanitation committee reports, Smith told the council that the landfill scale has been recertified. He added during streets and alleys that repairs to the asphalt plant are expected to be completed this week, allowing city crews to start working on potholes and street surfaces.

Lukasik addressed the council again during water/sewer improvements reports, speaking on behalf of Maguire Iron. He said water tank repairs are scheduled for mid-July. The council approved a bond resolution for the water main replacement.

Mahlum offered revenue and expenditure reports and treasurer’s cash reports for May. The council approved both reports. Mahlum told the council that several investments are coming due. CDs with the Wolf Point Federal Credit Union and Opportunity Bank are set to expire June 17 and 28 respectively.

According to Sullivan, Clayton Vine billed the city $1,500 for the boundary project, which was approximately half the cost she would have billed to complete the work.

Dschaak concluded the meeting by reiterating the need for a new council member to fill the Ward 2 vacancy. Interested parties should contact the city at 653‑1852. He added that the city will be accepting some small donations from Keystone XL Pipeline contractor TC Energy, but said details are still pending.