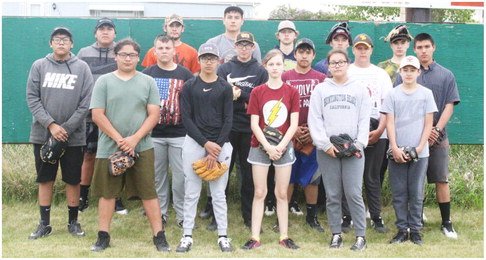 With the COVID-19 pandemic turning many aspects of life upside down, baseball was no exception. Coronavirus cast a veil of uncertainty on national youth baseball programs. The Wolf Point Yellow Jackets avoided being stopped from playing by taking innovative measures.

The American Legion first cancelled the Legion World Series and the eight regional tournaments, but allowed Legion baseball to continue in states that permit it. The Legion reversed that decision, cancelling Legion baseball across the nation following a meeting in Indiana.

The Wolf Point Yellow Jackets and many other former American Legion and Babe Ruth teams across Montana are self-sponsoring to avoid national cancellations.

The Wolf Point Baseball Association obtained insurance for the former Legion and Babe Ruth League teams and took on other sponsorship costs. Baseball programs in Glasgow, Froid, Scobey and other communities have done the same.

The “A” team with players between ages 15 and 19 fill the void of not having Legion baseball. The “B” team for Babe Ruth ages 12 to 15 also has some older players with less experience.

Smith said the Yellow Jackets might eventually af- filiate again with the American Legion or Babe Ruth League or both. He said that could happen as soon as next year.