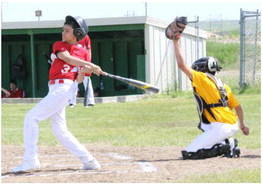 It was a great way to start a new program. The Post 49 Bulls downed Wolf Point in both games of a double-header played in Froid on Saturday afternoon, May 30.

An excellent pitching performance by Walker Ator led the Bulls to a 12-2 victory over Wolf Point in the opening game. Ator struck-out 10 batters and allowed just one hit in his four-plus innings on the mound.

The Bulls gained a 3-0 lead in the bottom of the first inning. A double by Braeden Romo knocked home Issac Johnson with the first run. After Romo scored on a hit by Ator, an error allowed Ator to cross for a 3-0 advantage.

A single by Dylan Tabbet scored Bode Miller to increase the gap to 4-0 in the bottom of the third inning.

The Bulls exploded for seven runs in the bottom of the fourth for an 11-0 lead. Highlighting the frame were a double by B. Miller that knocked home Ator and a single by Romo that brought home Payton Hauge. Also scoring in the frame were Johnson, B. Miller, Parker Sinks, Justice Bengochea and Riley Berry.

Wolf Point got on the scoreboard when Charles Page and Canyon Casterline crossed the plate in the top of the fifth. Javon Sniders connected for a double in the inning.

A single by Sinks drove in Romo in the bottom of the fifth to end the game by the 10-run rule.

The Bulls earned a 15-5 win in the second game of the double-header.

The Yellow Jackets got off to a good start when Sniders walked and scored in the top of the first inning.

A single by Terry Allmer knocked home Canyon Casterline to put Wolf Point up 2-0 in the top of the third inning.

The pitching of Allmer held the Bulls scoreless until they struck for five runs in the bottom of the third. Hauge doubled to bring home Ator and Johnson for a 2-2 deadlock. After Hauge scored on a wild pitch, a single by Tabbet knocked in B. Miller. Tabbet scored on an error for a 5-2 lead.

In the bottom of the fourth, the Bulls increased their lead to 7-2 when Hauge and Sinks scored for the home team.

The Yellow Jackets battled back to 7-5 in the top of the fifth. A single by Andrew Azure scored Sniders for the first run of the frame. Azure and Allmer later scored on an error.

The Bulls responded with four runs in the bottom of the fifth for an 11-5 lead. Crossing the plate were Romo, Ator, Johnson and Hauge. Accounting for runs batted in were Johnson, Hauge and Sinks.

Four runs in the bottom of the sixth ended the game by the 10-run rule. After Colt Miller scored on a wild pitch, Romo came home on a sacrifice fly by Eli Williams. A single by Hauge brought home Ator for a 14-5 lead. Hauge scored the final run on a single by Dakota Smith.