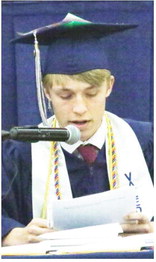 The Class of 2020 wasn't always perfect, but class members ended up sharing their talents to emerge as a great positive at Bainville High School. The 12 students received their diplomas during a socially distanced ceremony held in the school gym on Saturday morning, May 16.

Guest speaker Erin Romo, who taught the students art from first through 11th grade, said she doesn't like public speaking but was willing to talk at the graduation “because I miss you all so much.”

Romo noted how the class grew greatly from junior high to high school.

“Occasionally, there are classes that come along that you silently dread,” Romo said. “I admit you were that class.”

She explained the class was challenged by having so many big personalities. “It wasn't so much that we didn't like you, but struggled with having you not liking each other.”

Romo noted that attitude changed greatly once they arrived in high school. They became supportive of each other. They worked together to build floats, create fun skits and hold a beautiful prom. She explained classmates were willing to listen and accept each other.

“Don't compare yourself to others, but celebrate your differences,” Romo said. She added that they can build the same type of relationships with people they meet in the future.

She said that she saw in the seniors' posts during the shutdown that the students were going through a difficult time, but were growing.

“Don't let this belittle what you've accomplished,” Romo said of the school shutdown. “I will cherish the time with all of you. You have given me many memories to smile about. I admire each of you.”

Salutatorian Kailin Pippenger said the word to describe the class is perseverance. The class was tested and still succeeded.

She advised underclassmen to know that they always have an entire community behind them to help them become successful.

Valedictorian Carson Ullmer said that people should find and pursue their own dreams. He excelled in cross country, despite people wondering why he likes to run. He is planning to study accounting,which some people find boring.

“I've stuck to what I've wanted to do. I hope you do the same,” Ullmer said.

He added that putting in extra work pays off and makes a difference in the end. “Believe in yourself, it will do you wonders.”