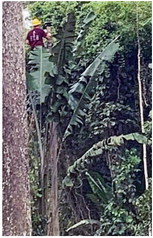 At press time, the project was ongoing. Said Potoczny, MECA had groups embark from three locations, Billings, Great Falls and Missoula, and they all met up in Denver, CO. They then flew to Houston, TX, and boarded a flight to Panama City, FL, before continuing on to La Paz, Bolivia. Potoczny said the project has been in development for approximately seven months.