Olsen Takes Pie In The Face 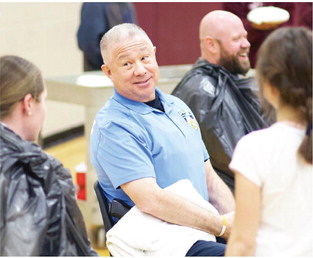 Northside Elementary School in Wolf Point held its annual “pie in the face” fundraiser Thursday, Feb. 13, at 3 p.m. in the school gymnasium. Students were able to earn raffle tickets to vote for the district staff and community members they most wanted to see turned into targets. They were also able to purchase tickets directly, as were community members.

Staff and community members lined up in the auditorium to accept their fate along with grades four, five and six cheering them on. The pies administered to winning contestants were plain whipped cream.

“This is a great fundraiser,” said Northside teacher Diane Bailey. “The kids really love competing to see who will get a pie in the face.” Bailey added that community support and involvement was up this year, thanks in part to strategically placed collection cans. Tickets were 25 cents apiece and collection cans were placed at the Wolf Point Police Department/City Hall, Wolf Point Cafe, Sherman Inn, Old Town Grill and Trinity Hospital.

The annual event raised approximately $280. Staff say the all proceeds will go toward general student expenses at the school.