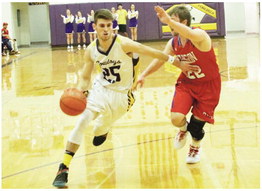 The Culbertson Cowgirls used hot outside shooting and clutch free-throw success to beat the Richey/Lambert Fusion, 58-54, in Culbertson on Saturday, Feb. 8.

Culbertson was up by only a 14-10 margin in the second quarter until a three-pointer by Makena Hauge along with inside shots by Kelsie Williams and Fallon Sun Rhodes led the way to a 23-10 lead.

Ahead 24-14 at the half, the Cowgirls increased the margin to 36-16 thanks to the three-point shooting of Hauge, Williams and Faith Bowland. With the Cowgirls struggling with foul trouble, R& L battled back to 38-28 at the end of the third quarter.

The Cowgirls responded with the opening seven points of the fourth quarter on four free throws by Ashtyn Ator and three points by Koree Marchwick. Free throws by Sun Rhodes and Ator increased the gap to 48-30 with 4:15 remaining.

The Fusion, however, didn't back down. The scoring of Shawna Eggert, Jaylyn Klempel and Courtney Herman led the comeback as the Fusion fought to 53-49 with still a minute to play.

Free tosses by Ator and Marchwick put Culbertson up 56-51, but a three-point play by Herman cut the margin to 56-54 with 12 seconds remaining.

The Cowgirls put the game away on two free throws by Williams with five seconds left.

Top scorers for Culbertson were Bowland with 13, Hauge with 12 and Ator with 10. Also scoring were Williams with nine, Marchwick with seven, Sun Rhodes with six and Gracie Moon with one.

Leading the Fusion were Herman with 21 and Klempel with 12 points.

The Cowgirls connected on 24 of 37 free-throw attempts while R& L made 19 of 28 tries. Four Cowgirls and two Fusion players fouled out.

The Cowboys lost a 68-66 nail-biter against R& L on Saturday night. Culbertson held the lead for most of the league contest until two free throws by Gabe Gonsioroski put the Fusion up 60-59 with 2:30 remaining. Two free tosses by Gabe Gonsioroski and a three-point play by Grady Gonsioroski gave R& L a 65-59 advantage heading into the final 1:20.

The Cowboys kept the pressure on when Eli Williams drove for a basket at the 1:04 mark. After another free throw by Grady Gonsioroski, Culbertson's Gabe Granada accounted for a three-point play to pull the Cowboys to 66-64 with 16 seconds left.

A free by Grady Gonsioroski put the gap at 67-64. After a foul by the Fusion, Williams hit two free throws for a 67-66 game with four seconds left.

Grady Gonsioroski made one free throw for a 68-66 margin, and the Cowboys' final attempt from beyond the half-court line fell short.

Top scorers for the Cowboys were Williams with 29 and Granada with 18. Also scoring were Colin Avance with eight, Payton Hauge with seven and Michael Pederson with four.

Leading the Fusion were Grady Gonsioroski with 25 and Blake Lien with 13 points.

Culbertson led by as many as 15 points in the second quarter and 38-28 at the half.