Will This Be Wolves’ Big Year With Late-Season Winning Streak? 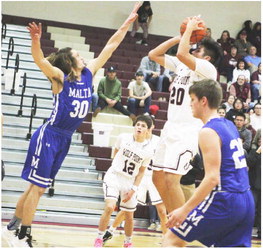 Head coach Troy Blount said, “The Wolves’ hard work is paying off” after expanding the winning streak to five straight.

Blount has been building the winning basketball team he has over the past several years he has been at the helm.

The Wolf Point Wolves have climbed from fourth place in District 2B in early January to sole position of second place with less than 10 days remaining in the regular season. Only Harlem leads the Wolves.

The Wolves’ last trip to a Class B state tournament was in 2012 and the last time the Wolf Point boys won the state title was in 2011.

Just four games — one District 2B contest and three non-conference — remain on the regular season schedule: at Glendive Thursday, Feb. 6; Baker at Wolf Point, Saturday, Tournament will be in Butte Thursday through Saturday, March 12-14.