Area Gymnasts Do Well In Mandan 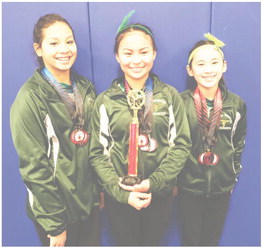 The Eastern Montana Gymnastics team continued their winning ways at the Starstruck Meet in Mandan, N.D., Jan. 25. All 12 girls competed for the Circle gym and came away with two team first-places trophies, three first-place all-around awards and 11 first-place event finishes in the Xcel program of USA Gymnastics.

The Xcel program gives awards to the top half of each age group and every EMG gymnast won an award, whether a medal for first, second or third place or a ribbon award for the other places. Also, every EMG gymnast improved their score by several points from their last meet.

Since the top three scores count for each team score, the three gold level EMG gymnasts used every one of their scores to win first place over the Dickinson team of five gymnasts, a great achievement, especially by a margin of 3.85 points.

Shelica Deserly of Wolf Point led her team with first places on vault, balance beam and all-around and second places on uneven bars and floor, in the older age group of six gymnasts. Jill Deserly of Wolf Point and Lina Smith of Richey competed in the younger age group of four gymnasts. Jill Deserly was first on vault, bars, beam and all-around and second on floor. Smith earned a first on floor and was second on bars, beam and her all-around.

Eight girls competed for the first-place silver team, beating the second-place Dickinson team by 3.45 points. Six of the EMG girls competed against each other in the middle age group. Lily Beery of Circle took the first places in vault, bars, beam and all-around, coming in second on floor to Ava Hove of Circle. Hove also was second on vault, beam and her allaround and was fourth on bars. DaRae Deserly of Wolf Point was second on bars and had third places on beam and all-around. She was tied for third on vault with Ashlynn Johannessen and Kate Nasner, both of Wolf Point. Johannessen was third on floor and fourth for her all-around. Nomi Deserly of Wolf Point was third on bars and fourth on floor. Nasner also added a fourth place on beam.

Also competing for the silver team were Ali and Abbey Gibbs of Circle. It was their first competitive meet since starting gymnastics only a few months ago. They both competed in the older age group of nine gymnasts and had some great routines for their first meet. Ali Gibbs had the first place beam routine and was also fourth for her all-around and fifth on floor. Abby Gibbs was fourth on bars and was tied for sixth on vault and floor.

The girls’ next meet will be in Great Falls in February.